Arc flashes are nothing to joke about as they have the potential to be deadly in many instances. The progression of an arc flash event starts with an arc fault, which is essentially a short circuit conducted between two live parts, or by one live part and one ground, creating ionized air. The next event in this progression is referred to as the arc flash. Think of an arc flash as the extreme heat and blinding light produced by the arc fault. If the conditions are right, an arc flash can reach the final stage and result in an enormous electrical explosion known as an arc blast. This supersonic shockwave is the result of the arc flash and the newly ionized air vaporizing any metal conductors within the unit. The traumatic force of an arc blast can severely injure or be deadly to those in the near vicinity as well as damage just about everything nearby.

Definitions aside, this article will discuss the specific dangers associated with this type of accident, and ultimately explain how to protect oneself and prevent arc flashes all together.

What Happens During an Arc Flash?

Electrical arcing begins when the electricity exits its intended path and begins traveling through the air toward a grounded area. Once this happens, it ionizes the air, which further reduces the overall resistance along the path that the arc is taking. This helps draw in additional electrical energy.

The electric arc will travel toward a ground of some type, which will typically be whatever object is closest to its source. The exact distance that an arc flash can travel is known as the arc flash boundary. This is determined by the potential energy present and a variety of other factors such as air temperature and humidity. 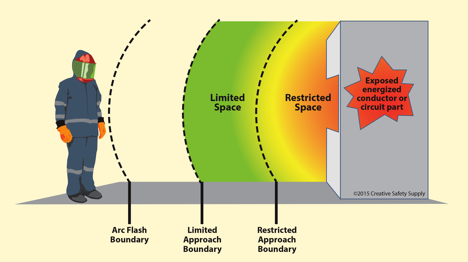 How Long Does an Arc Flash Last?

An arc flash can last anywhere from a fraction of a second to several seconds, depending on a number of factors. Most arc flashes don't last very long because the source of the electricity is cut off quickly by circuit breakers or other safety equipment. The most advanced systems today use devices known as arc eliminators, which detect and extinguish the arc within just a few milliseconds.

What Causes an Arc Flash?

In most cases, the root cause of an arc flash will be a damaged piece of equipment such as a wire. It could also be a result of someone working on equipment, which makes it possible for the electricity to escape from the path it is normally confined to.

Electricity is always going to follow the path of least resistance. This is why an arc flash will not necessarily happen as soon as something is damaged, or an alternate path is made available. Instead, the electricity will continue down the intended path until another option that has less resistance becomes available.

The following are some examples that can create a path with lower resistance, and therefore cause an arc flash: 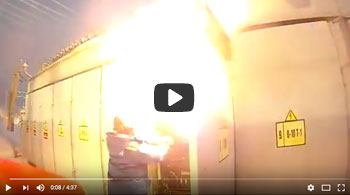 Potential Damages of an Arc Flash

Due to high temperatures of up to 35,000°F, intense blasts, and other results of an arc flash, these electrical mishaps can cause a lot of damage very quickly. Understanding the different types of damage that can occur can help facilities plan their safety efforts. The following are all examples of what an arc flash or arc blast are capable of.

Wearing personal protective equipment can provide a significant amount of protection, but it cannot eliminate all risk. Employees who are present when an arc flash occurs are always at risk, no matter the PPE they are wearing. This is why it is important to de-energize a machine before it is worked on whenever possible.

Companies with electrical equipment need to take arc flash safety seriously. There are numerous options that can reduce the chances an arc flash occurring and keep people as safe as possible if one does happen.

All facilities must consider the various arc flash safety standards that have been put in place by government and private institutions. Determining which standards to follow can help ensure a facility is in compliance with area rules and regulations, in addition to helping keep the facility safe.

The following are the most common standards that cover arc flash safety in the United States:

The first step in arc flash safety is minimizing the risk of one occurring. This can be done by completing an electrical risk assessment, which can help identify where the biggest dangers are in a facility. Following IEEE 1584 is a good option for most facilities by helping to identify common problems.

Routine inspections of all high voltage equipment such as electrical switchboards, panelboards, control panels, socket enclosures, motor control centers, and all wiring are essential. If there is any sign of corrosion, damage to wires, or other issues, they should be fixed as soon as possible. This will help keep the electrical currents safely contained within the machines and wires where they belong. 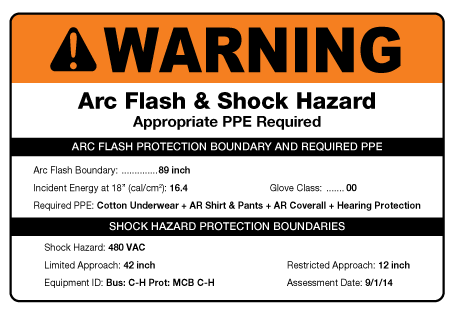 Anywhere in a facility where high electrical currents can exist should be properly labeled with arc flash warning labels. These can be purchased pre-made or printed with any industrial label printer as they are needed. The National Electrical Code article 110.16 clearly states that this type of equipment needs to be marked to warn people of the risks.

Whenever a machine needs to be worked on in any way, it should be completely de-energized. De-energizing a machine is more than just turning it off. All machines should be shut down and physically disconnected from any power source. Once disconnected, a voltage check should also be done to ensure there is no latent energy stored away.

Ideally, a lockout/tagout policy should be in place, which will put a physical lock on the electrical supply so that it cannot be accidentally plugged back in while someone is working on it.

It should be very rare, but there are some cases when machines must be worked on while they are still energized. When this is the case, all employees working in the area should be required to wear proper personal protective equipment.

The specific PPE that is worn should correspond to the maximum potential risk based on the amount of electricity going through the machine. Having head to toe personal protective equipment can help to prevent serious injury or even fatality should an arc flash occur while the machine is being worked on.