Takt time borrows from the Japanese word takutotaimu, which in turn is a term derived originally from the German word Taktzeit, which translates literally to “cycle time.” Less literally, it refers to the baton used by an orchestra’s conductor to signal musicians and maintain an even tempo during a performance, and that’s where it ties in to lean manufacturing and six sigma. We don’t want our production lines getting off beat, out of tune, or marching to their own drum. Takt time helps find the delicate balance between production and customer demand.

Do you know your Takt time?

The Takt time calculator will easily determine the pace of production.

In business, an even production tempo reduces waste and improves efficiency, which is why many organizations (first in Germany, then in Japan, then throughout the world) have adopted the concept of Takt time to determine the total amount of production time that is actually productive and what the production time should be for standard work. Takt time was first introduced to Japan by German engineers in the 1930s.When the Toyota Production System became popularized throughout the world, and consequently transformed the way the world manufactured products, Takt time became an important tool in companies using Lean methodologies, practicing six sigma, and looking to reduce cycle time. Takt time can be expressed via the following equation: 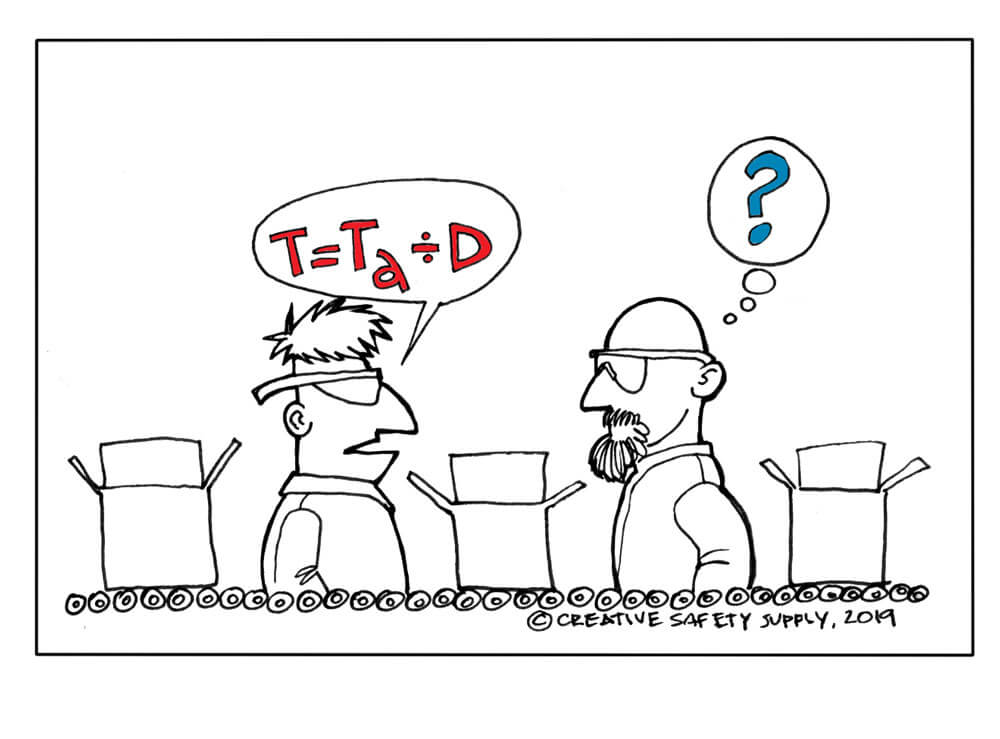 Let’s take a look at a real-life example of Takt time:

A comb factory operates 500 minutes per day. Customer demand is 250 units per day. In this case, Takt time would be:

It’s important to note that operation time refers to the total number of hours/minutes employees work minus time spent on breaks, lunch, meetings, or performing maintenance. One way to find accurate, actual production time for a facility is Overall Equipment Effectiveness, or OEE. This calculation helps a business find maximum speed of production, then accurately factors in the everyday things—breaks, maintenance, shift changes, etc.—that stop production. From here, a company can have an accurate understanding of the accurate, realistic speed of production.

If there’s a considerable disparity between customer demand, production speed, and Takt time, then a company would be wise to create a value stream map, or VSM, to find where non-value activities are happening. It’s best to first calculate OEE, then, once the percentage of effectiveness at which your production process is running is known, a VSM can be drawn. Once a business has this information, its managers can agree upon a plan of action to decrease waste.

Implementing Takt time is not without its complications. Workers can be resistant to being told the speed at which they’re expected to work, and lack of trust in a company’s commitment to its employees may cause them to question the use of implementing this new system, particularly if fear of layoffs is present. A company’s management, which is dictated by finances, may be tempted to throw the system off kilter by forcing production to exceed Takt time in order to meet or exceed quarter quotas. There are also technical limits. Equipment/operator limitations may make it difficult to achieve Takt time. Once Takt time is set, it can be very hard to change, and that it’s very hard to control customer demand fluctuations which may call for an assembly line to speed up or slow down.

Takt time is one of the most effective tools in Lean six sigma to ensure you're meeting actual customer demand with efficient cycle times.