Along with Jidoka, Just-in-time (JIT) production is one of the pillars of the two Toyota Production System. It is a production method that fundamentally changed the way large-scale production occurred in the 20th century, and is the basis for Lean Manufacturing (Lean for short), which is the school of thought many modern companies have modeled themselves after.

JIT production is often called a pull system because instead of using traditional push production where scheduling is done based on historical data and demand forecasting, production is scheduled based on actual customer orders. Rather than predicting demands from customers, the JIT method requires that actual customer demand exists. Production doesn't begin before an order triggers it. This system not only reduces the amount of extra inventory, but also reduces the amount of work in progress at one time. 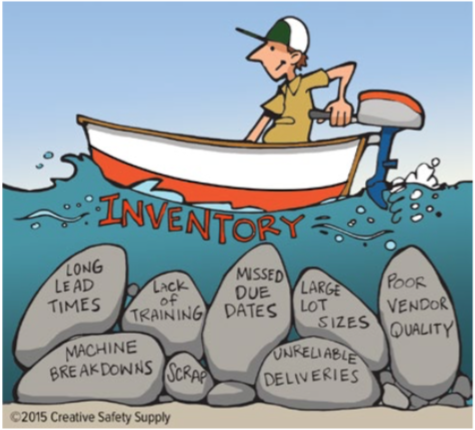 JIT works best with one-piece flow operations where one product is completed at a time instead of performing each step of a process in batches. This is the production method that best aligns with Lean because it minimizes waste, and makes workers operate more efficiently.

Taiichi Ohno, a leader at Toyota, developed this system. JIT production was inspired, of all things, by supermarkets. He observed the way supermarkets stock shelves. These stores only refill a shelf when a customer buys a product. That action triggers the restocking of the shelf and the reordering of products from suppliers.

A JIT system is often controlled by visual cues called kanban cards. Downstream processes send cards (or other signals) upstream to inform people they should begin taking special actions (such as making products).