The Toyota Production System, also referred to as TPS, is a strategy that helps organize the manufacturing and logistical aspects of a business. Developed by the Japanese auto manufacturing company Toyota, this Lean method has a special focus on auto manufacturing. However, it has been modified to work with other manufacturing outlets and businesses as well. The system helps bring improved organization efforts to a facility, reduces waste, and can improve the bottom line of companies that choose to adopt it. 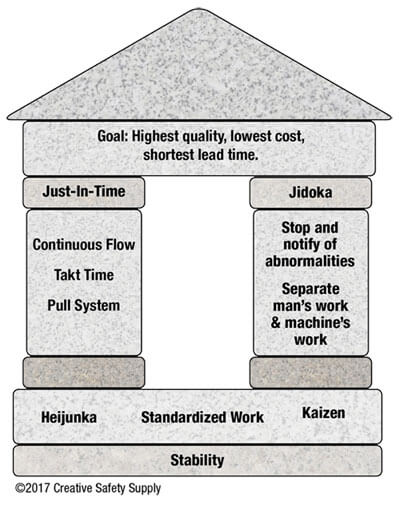 Whenever learning about TPS, it’s common to visually depict the system as a house. A well-made home often still has to undergo renovations as time passes whether that be because of outdated materials or broken appliances. TPS is made to achieve the same goals regarding updating old and worn-out systems for ones that are new and improved. Applying the Toyota Production System into any business model makes for “living” in that metaphorical house better for those within the organization.

History of the Toyota Production System

TPS was developed between the years 1948 and 1975. Japanese industrial engineers Taiichi Ohno and Eiji Toyoda are the two primary individuals credited with the development of this system. Today, Toyota is recognized as a leader in the auto manufacturing industry, and most other manufacturers use the Toyota Production System at least in some fashion.

TPS is recognized as one of the major contributors to the development of Lean manufacturing and many other Lean concepts that people are familiar with today. No matter the type of facility being run, learning about TPS can help inspire innovation and prepare a company to implement a variety of workplace improvements.

What Are the Principles of TPS?

To understand TPS, it is important to learn about the principles used in this system. Each of the following fourteen principles are integral to the success of the Toyota Production System:

When implemented properly, TPS and its corresponding fourteen principles, can have a positive impact on the entire manufacturing process. Aside from the above principles that the Toyota way is built upon, TPS also relies on two other primary concepts: Jikoda and JIT production.

A simple and fast explanation of Jikoda is “automation with a human touch.” Jikoda is an important Lean strategy that TPS uses for the following four steps:

The first two steps in this process can be automated, but the last two involve a more hands-on approach that revolve around physically repairing the problem and investigating further into what could be the root cause. With that being said, Jikoda is an important part of continuous flow in TPS and Lean manufacturing.

Just-in-Time manufacturing is the second pillar of the Toyota way as it aims to increase the company’s efficiency capacity by only having enough inventory as is in demand. Overall, this strategy reduces the amount of space that unused inventory takes up as well as prevents overordering on raw materials to lower the company’s overhead.

Getting to that golden ratio of when to order and when not to order new materials can be quite difficult. Timing is everything which means a well-executed scheduling system, such as Kanban, must be put into place for a JIT manufacturing system to be successful. Aside from that factor, there are four qualities of work that JIT manufacturing relies on:

Using a Kanban scheduling system in conjunction with monitoring the above four qualities is critical for a smooth-running process. If any one of them becomes compromised, the whole system falls into disarray resulting in potentially unhappy customers.

When trying to understand the Toyota way, it is important to look at some of the other concepts used within this methodology. The following examples were often developed based on
TPS, but they are now considered important aspects of it by many companies.

Lean management is a component of lean manufacturing, which has the overall goal of eliminating waste from the workplace. That includes wasted time, wasted products, and wasted services. Even small improvements that eliminate waste from a process can end up amounting to quite a bit over time. With that being said, Lean management specifically looks at how companies can operate better and what the management team can do to help.

The concept of continuous improvement is so integral to TPS that it has its own term. Kaizen is a Japanese term that means continuous improvement. While Kaizen strategies are certainly interested in finding ways to make large scale improvements, they also focus on the little things. If Toyota can find a way to reduce the amount of physical waste created when making one car by just 1%, it would add up over time to be huge.

Kaizen Toyota isn't just about eliminating waste. It also looks to continuously improve the quality of the products that they make, and that starts with the company’s employees. From the CEO down to the assembly line worker, improving people will lead to an improved company. Those who are given proper training, encouraged to better themselves, and seen as a key part of a company are going to perform at a higher level. They will also be more likely to find problems and provide solutions to those issues. 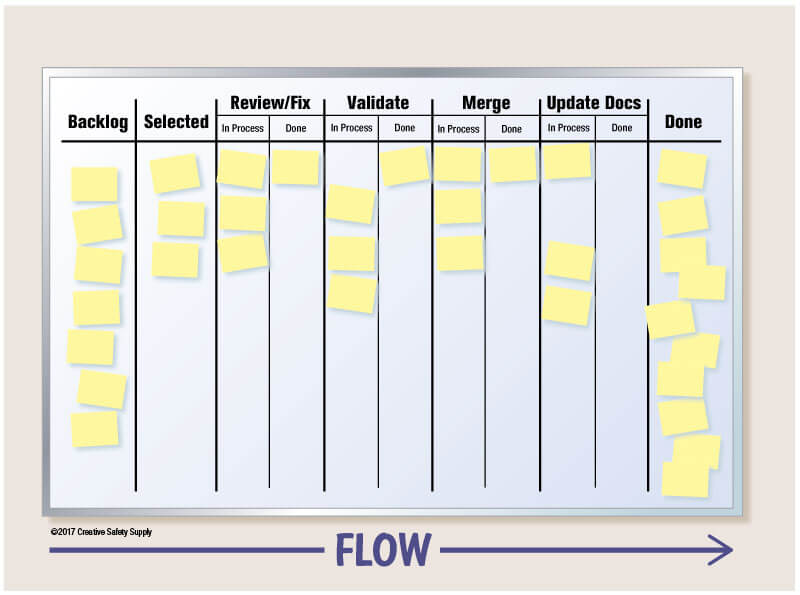 Kanban, the "Just-in-Time" manufacturing system of TPS is a strategy for scheduling in the manufacturing process. Rather than having a massive inventory of each part that is required for the products being made, systems running the Kanban Toyota strategy will have only as many as are needed for a specific amount of time.

When the amount of a certain part is low, the Kanban system will alert the supplier so they can deliver more. When running perfectly, the new shipment will have the parts arriving at the production line where they are needed just as the last one was being used. Operating in this way allows a company to reduce the risk of being stuck with a large amount of a certain part if the demand suddenly dries up. It also eliminates the need to have large areas for storing these types of parts.

Most people quickly find that there are many unusual terms used in TPS. These are typically Japanese terms used to describe a specific concept or process that is important to the overall success of a project or system itself. Learning what some of these terms are and what they mean can help avoid a lot of confusion and other issues, both during the initial implementation and long into the future. Some of the most common terms used are:

There are many other terms used when discussing TPS as well. Many companies like to continue using the Japanese words when discussing these types of concepts because it can help set these ideas apart. While it may seem awkward at first, most people will quickly catch on to all of these different words and concepts.