Accidental contamination is a major worry in the food industry, and while it's impossible to completely rule out all contamination, metal detectable labels and traceability tags make it easy to ensure that your labels aren't the culprit. Not only is metal detectable label supply exceedingly durable, designed to stand up to the most intense sanitization efforts, but its unique design also includes minute particles that will immediately set off metal detectors, making it quick and easy to remove contaminated food products without extended downtime.

How Does Metal Detection Work? 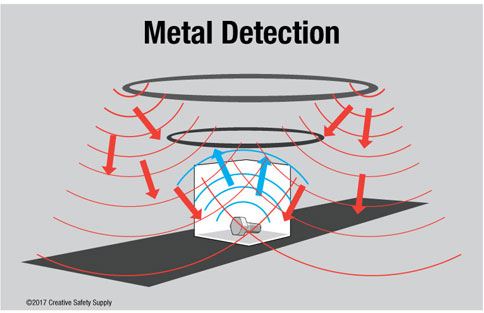 Modern metal detectors vary greatly in size and application, from portable, handheld wands, to the semi-permanent mounted detectors found at airports, yet all metal detectors rely on the same basic electromagnetic concepts to sniff out metal objects.

Within every metal detector, there is a coil of wire that, when exposed to an electric current, creates an invisible magnetic field. Though you can't see, feel, or hear it, this field is incredibly pervasive, and it can easily penetrate clothing, soil, and even stone without losing potency, a valuable attribute whether you're searching luggage for contraband, or combing the beach for long lost coins.

Metal Detectable Labels And The FDA

The U.S. Food And Drug Administration offers no official guidelines on how labels should be used nor what sorts of labels are most effective, but the latest version of the FDA's Code of Federal Regulations begins its section on food production facilities with the following crucial admonition:

"Buildings, fixtures, and other physical facilities of the plant shall be maintained in a sanitary condition and shall be kept in repair sufficient to prevent food from becoming adulterated within the meaning of the act." -- FDA CFR Title 21, Vol. 2, 110.35(a)

In other words, where there are no official regulations, the FDA urges production facilities to take every possible step toward ensuring that food will not become contaminated during production. That includes utilizing clever solutions like metal detectable labels, which are not mandatory, but can go a long way toward protecting a business longevity and the health of its customers.

You've been hired as a manager at a company that bakes and distributes cookies by the thousands. Known for their excellent quality, these cookies are adored by customers throughout the world, and they're often devoured as quickly as they can be shipped. There are even websites and social media hashtags devoted to these delicious baked goods!

Cookies are your business and business is good, however, business could always be better. In an effort to keep up with demand and improve efficiency, your bosses have recently unveiled a new facility design that utilizes extensive labeling throughout. Every workspace, tool, and potential hazard is vibrantly marked, making it easy to stay productive while avoiding danger. Newly organized, the facility quickly sees a decline in on-the-job accidents and equipment defects, as well as an overall increase in productivity.

Normally, this would be cause for celebration, except these improvements coincide with increasing reports that customers have become ill after eating the cookies. After a brief investigation, it's determined that labels installed to warn employees of a hot surface started to deteriorate, eventually flaking off into the cookies themselves. Though the metal detectors guarding the end of each production line prevent pieces of machinery from leaving the factory inside a cookie, they have no power over vinyl labels, and are thus as effective at preventing this contamination incident as wishful thinking and crossed fingers.

Had those aforementioned labels been metal detectable, all of this could have been avoided. Metal detectable labels are designed to stand up to the harsh conditions of food preparation (which can include extreme heat, caustic sanitizing chemicals, and pressurized water) and in the rare event they do contaminate food, the tiny metallic particles embedded in the labels ensures that those metal detectors at the end of the production line will have no trouble exposing the hazard before it causes real problems.

Likely the most popular detector technology, a Very Low Frequency metal detector relies on two distinct coils: the Transmitter coil and the Receiver coil. When in use, an electric current passes through the Transmitter coil in one direction, then back in the opposite direction. The charge switches directions thousands of times per second, which generates a stable magnetic field that is constantly expanding and contracting. Any conductive objects entering this field will generate weak, complementary magnetic fields of their own, which are then picked up by the Receiver coil.

Unlike VLF detectors, Pulse Induction detectors rely on a single coil or multiple coils designed to work in tandem. By sending a short, powerful burst of electrical energy through the coil, a magnetic field is briefly generated. Once the burst ends, the field collapses suddenly, sending an extremely short burst of energy, known as a "reflected pulse," back through the coil. A dedicated sampling circuit within the detector monitors the length of these pulses, and if it detects that a pulse took an inordinately long time to return (due to interference from other magnetic fields) an audible cue alerts the user to a nearby metal object.

BFO detectors rely on two similar coils, one in the detector's control box, and another located in its search head (the flat, shovel-like extremity held perpendicular to the object or area being searched). Both coils are attached to oscillators which generate thousands of pulses of current per second, slightly offset for each coil.

As energy is repeatedly pulsed through these coils, they generate radio waves which are monitored by a tiny receiver in the detector's control box. This receiver, in turn, generates a series of regular tones based on the subtle differences between the magnetic fields surrounding the two coils. If the coil in the search head, however, passes too near a metal object, it can create a magnetic field around that object. As this new magnetic field interferes with extant fields surrounding the coil, it also alters the coil's radio waves and the tones they generate.

Though a far cry from our modern devices, the first "metal detector" can be traced back to 1881. In July of that year, U.S. President James A. Garfield was shot and mortally wounded, though he would spend more than two months clinging to life before finally succumbing to his injuries. While doctors tried unsuccessfully to locate and remove the bullet from Garfield's abdomen, famed scientist and inventor Alexander Graham Bell cobbled together a device called an "nduction balance" which utilized the same electromagnetic principles upon which our modern detectors rely to pinpoint the small, metallic mass. Though ultimately unsuccessful at saving Garfield's life -- possibly due to interference from a nearby metal bed frame -- this induction balance is often credited as the first electromagnetic metal detector.

Specific to the food preparation industry, in-foil metal detectors are custom manufactured devices designed to detect pieces of metal within food products that feature foil or aluminum packaging. Unlike more mobile detectors, in-foil metal detectors feature a tunnel in which a strong magnetic field is generated. Despite the foil shell, a ferrous object passing through this field will receive the minute electrical charge necessary to generate its own magnetic field, which, in turn, sets off the detection system.

Unfortunately, in-foil metal detectors have a few notable weaknesses. First, they're usually only useful for finding large pieces of ferrous metal. If a piece of metal is too small, its presence can be obscured by false signals created by the foil interacting with the detector's magnetic field. Second, in-foil metal detectors are best suited to finding ferrous metals. While an iron nail would immediately set off the detector, it's far less likely that a similar nail made of tin would alert the machine.