Ammonia refrigeration is one of the older types of refrigeration that is still used today. While the average person doesn't realize it, just about all food and drinks that are purchased have been kept cold using ammonia refrigeration at some point along the way. This is because it is a reliable and efficient refrigerant with years of safe, proven utility.

People first started using ammonia as a refrigerant in France starting in the 1850's, and its use was brought to the United States in the 1860's. By the 1900's, ammonia refrigerators were being used in many commercial facilities to create blocks of ice, keep food cold, and produce other chemicals. Starting in the 1920's, it was used in ice rinks, and by the 1930's it was used in air conditioners for both industrial requirements and for keeping homes cool.

While ammonia is not commonly used in air conditioning units anymore, it is still very common for cold storage of food and in many industries that require this type of cooling. Today, ammonia is mostly used for larger scale cooling requirements such as college campus dorm room air conditioning, large office buildings, hospitals, airports, hotels, and more.

What is Ammonia Refrigeration

Ammonia refrigeration systems are, as the name implies, a system of refrigeration that uses ammonia. The ammonia is the chemical that is used to absorb the heat from one area, and bring it to another area to dissipate. Concentrated ammonia is much colder than typical room temperature, which makes it an excellent choice for keeping things cool.

How Does Ammonia Refrigeration Work?

An ammonia refrigeration system, like all vapor-compression refrigeration systems, are made up of a number of components that work together. Essentially, the ammonia is the chemical that is contained within the system to remove heat from an area, and then dissipate it in another area. Ammonia is very efficient at this because it has a very low boiling point when liquid (-27F).

Components of an Ammonia Refrigeration System 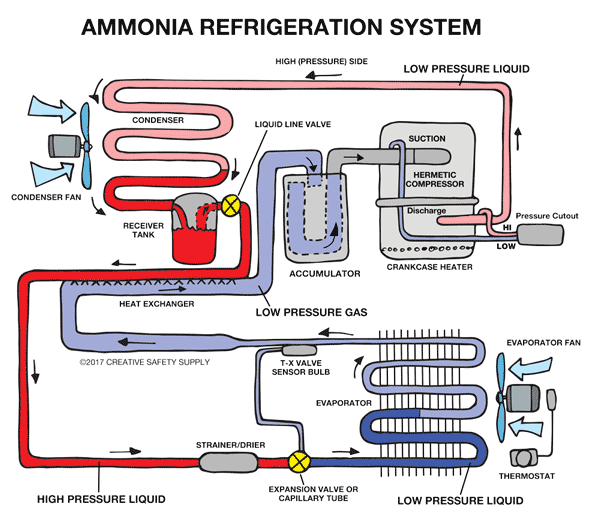 As with all refrigeration systems, there are a number of components that are needed to keep the system working properly. If any of them are missing or break down, the refrigeration system will stop working almost immediately. The required components are a compressor, condenser, expansion device, and an evaporator.

You can see the basics of how this works in the following image:

In addition to these basic components, many units will have additional parts to help ensure everything works as efficiently as possible. Many refrigerators will have a fan to direct the cool air where it needs to be, and of course there will be an insulated area to help keep heat out so that the refrigeration unit doesn't have to work any harder than necessary. 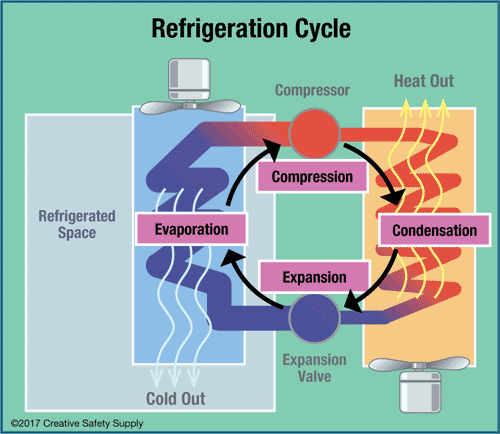 Each step in this cycle is essential in regulating the temperature properly. The following image gives a good introduction to the ammonia refrigeration cycle, which will be explained in more detail after. Part of this is offering advice on how to recognize a hazard in these refrigeration units. Early detection of a leak can allow everyone time to safely evacuate while the leak is repaired.

In the cycle, the ammonia gas is compressed using the compressor, which causes it to heat up as it is pressurized. Upon reaching this point, the ammonia travels up into the coils typically located in the back of the refrigeration unit. In the coils, the heat is dissipated, which causes the ammonia to condense into a liquid.

That liquid ammonia then travels through the expansion valve, which is a small hole that opens up into a lower pressure area. When this occurs, the ammonia quickly begins to boil. It is important to note that liquid ammonia boils at -27F, and obviously is much colder than the surrounding area.

The cold ammonia cools the air around it, the inside of a refrigerator in many cases. While the ammonia begins to warm, the air gets colder. The ammonia continues to travel through the refrigerated area slowly becoming warmer as it goes. Finally, it will be sucked back into the compressor where it will begin the cycle again.

When using ammonia refrigeration, or ammonia for anything in the workplace, there are a variety of OSHA regulations that need to be followed. Having proper safety equipment in place and keeping the refrigeration unit well maintained can help reduce the risk to employees.

Ammonia can be extremely dangerous. If someone is exposed to as little as 300 parts per million in the air around them, they will likely experience extreme health issues and potentially even die from exposure. Ammonia is a highly corrosive chemical and must be washed off immediately and treated promptly to prevent long-term problems from skin or eye exposure.

Fortunately, ammonia has a very strong odor that people naturally find offensive. This odor is very distinctive and detectable at around 20 parts per million, which is significantly lower than the hazardous levels. When people begin smelling ammonia, they can evacuate the area quickly and have the maintenance teams take care of the problem.

Labeling the piping in these units to alert those performing maintenance to this requirement can help avoid potential problems. If this precaution is not taken, someone may unintentionally replace a pipe with one made of copper, leaving the facility at risk of a leak.

The International Institute of Ammonia Refrigeration is an organization that educates and informs about best practices for safely using ammonia for refrigeration. IIAR also provides standards for this purpose.

Additionally, IIAR publishes bulletins that offer guidance to facilities. This guidance provides clarification about safe ammonia use, especially when standards do not explain a particular topic. Below are relevant bulletins: 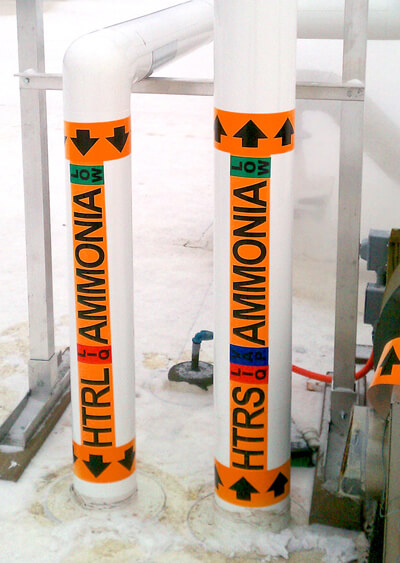 As mentioned above, IIAR Bulletin 114 covers the requirements for ammonia piping labels. These requirements are different from ANSI pipe label guidelines, which apply to most other pipes and are accepted by OSHA in its pipe labeling requirements as well.

Those interested can also learn more about these industrial labeling requirements in our Ammonia Pipe Marking Guide, which explains how to create labels according to IIAR pipe marking guidelines.