William Edwards Deming was an engineer, statistician, writer, professor, and management consultant throughout his entire life, all the way up to his death at the age of 93. He is well known for his work with Japan, post-World War II in the 1950s where he taught his theories on Statistical Product Quality Administration. In the United States, Deming is known for his work on the 14 points of management as well as for his System of Profound Knowledge theory.

Throughout his life, Deming was more well known in Japan than in his home country. It was only a few years before his death that he began to gain widespread recognition for his work on continual improvement in the United States.

This article will address the question of who Deming was as well as the incredible work he did in terms of contributing to continuous improvement, efficiency, quality control, and of course, Lean manufacturing and the Toyota Production System.

Who Was William Edwards Deming?

William Edwards Deming was born October 14th, 1900, in Sioux City, Iowa. The son of Pluma Irene Edwards, a musician and William Albert Deming, a mathematician and man of law. W. Edwards Deming was encouraged to succeed in his studies from a very young age.

While attending graduate school at Yale, Deming worked as an intern at Western Electric’s Hawthorn Works in Cicero, Illinois. Later after he graduated from school, Deming worked in the census department of the United States department of agriculture under Gen. Douglas MacArthur. During that time, he was also working as a census consultant for the Japanese government.

Consequently, this is where he became involved with the Union of Japanese Scientists and Engineers, also known as JUSE. Shortly after teaching a seminar on statistical process control, Deming was invited to talk with Japanese business leaders on Deming’s own theories on modern methods of management practices. After this, his lifelong career in statistical quality control and modern methods of industrial management commenced.

Why is Deming Known as the Father of Quality Control?

Graduating with a PhD in mathematical physics, naturally Deming was introduced to statistics. However, it was quite unconventional when he applied his new skills to manufacturing management techniques. Deming used statistical methods to quantify any type of manufacturing process. Melding these concepts together was all about how efficient the company was, the quality of their products, and then related both of those theories to how the company was managed.

Known as the father of quality control, Deming’s principal theory dealt with the reason why manufacturing operations were flawed. In short, management was to blame. To go with his simple idea of ensuring quality before the product was created, Deming reasoned that the only way operations could be improved was if management was taking immediate action to do so, instead of pinning improvement solely on employees.

The Relationship Between Variation and Quality

Deming believed that to achieve a reliable and predictable output, one must understand the different types of variation in a process. Understanding inherent variation is essential for running a successful Total Quality Management, or TQM program.

There are a total of four different types of variation in a process:

How do we fix variation when tampering leads to even more variation? The key is monitoring. Deming realized that trends should be looked at as they build over time, not every single variation should be “taken care of” in the moment. In fact, it was much better to study the process before making such a large decision. 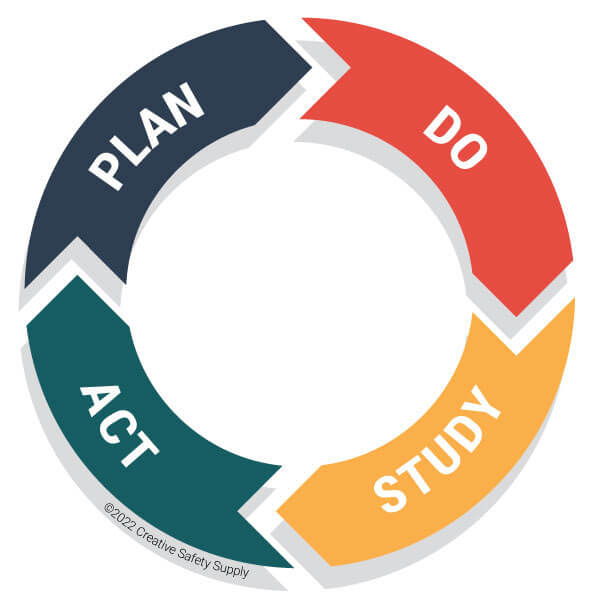 Following Lean manufacturing methods such as 5S can be done but gathering an understanding on the philosophy of management plays a huge role on whether or not leaders can achieve what they set out to do within a Lean system. That’s where the Deming teachings come into play.

The statistical methods that Deming contributed to modern methods of Lean manufacturing included the PDSA cycle, the 14 points of management, and the 7 deadly diseases of management. Each of these systems promote a vigorous program centered quality control as well as continuous improvement in the workplace.

It must be remembered, however, that Deming's statistical methods work on a different level than that of Lean manufacturing. While they share similarities, they still rely on differing techniques to achieve efficiency, improvement, and an increase in productivity.

The Deming Wheel
Often called the PDSA Cycle or the Shewhart Cycle, the Deming Cycle is an exceptionally simple model for improvement. Deming learned this technique from his colleague Dr. Walter Shewhart and made an effort to popularize the method.

There are four parts to this method, they are as follows:

You may be familiar with PDCA which stands for Plan, Do Check, Act. However, Deming realized that this method relied on determining the success or failure of an implemented change. By replacing “Check” with “Study,” Deming was able to focus on studying the actual results of the new quality control method to see if any revisions were needed or if any new knowledge was needed to make a better change.

Both PDCA and PDSA are excellent tools to be used alongside Lean management practices and as a Total Quality Management problem-solving tool.

Deming conceptualized the 14 points of management upon writing his book titled Out of the Crisis. These points reflected the necessary obligations that management were to follow to construct a workplace that was immersed in improvement as well as invested in long-term business goals.

It must be noted that Deming dd not intend these 14 points to be a checklist of actions, but rather a philosophical code to follow and embrace within the workplace culture. Not only would this effect the quality of output from companies that successfully implemented this type of culture to the workplace, but it would give them a better understanding of their purpose as individuals as well as a collective whole.

The following is the list of the 14 points for management that W. Edwards Deming developed:

There is no picking and choosing which of these principles you can implement at your facility. Each one of them must be used together to get the desired results. In fact, Dr. Deming ties these concepts together in what he calls The System of Profound Knowledge or SoPK. It ties together his teachings of quality, management, and leadership into four areas:

The 7 Deadly Diseases of Management

W. Edwards Deming has defined the 7 barriers that management will likely face while following his philosophy of the 14 points to succeed in transforming the workplace into one that has a better level of understanding in continual improvement for processes.

Those deadly diseases are as follows:

Deming does note that these are particularly unique to industry in the United States. By being aware of these challenges that you may face in the workplace you can avoid or appropriately address them with the use of Deming’s 14 points of management.

,p> Because of Deming’s extensive work involving Japan’s economic recovery after World War II, the Prime Minister of Japan awarded Deming its highest honor for a non-citizen: the Order of the Sacred Treasure, Second Class.

On top of being so influential in Japan as well as his methods becoming more popular in America after his death, Deming had one of the highest awards for TQM attributed to him in 1951 called the Deming Prize. AS one of the longest-running prizes for TQM, the Deming Prize is awarded to both individuals as well as businesses who have successfully implemented a Total Quality Management program.

All in all, Deming was quite the contributor to quality management theory during his life and well after his death.