What is anhydrous ammonia used for?

While NH3 is dangerous, anhydrous ammonia also has countless uses relating to the medicinal field, functions as a cleaning agent when diluted, is commonly used as a fertilizer, and in some cases is stolen to illegally produce methamphetamine.

Most anhydrous ammonia is produced for the agricultural community. 175 million tons of anhydrous ammonia was produced in 2016 and 80% or more of it was used as fertilizer due to its high nitrogen content. To go into more depth on why the agriculture business likes to use it as fertilizer, NH3 has a molecular weight ratio of 82.5% nitrogen to 17.5 % hydrogen which is why large-scale wheat and corn farmers use it often. 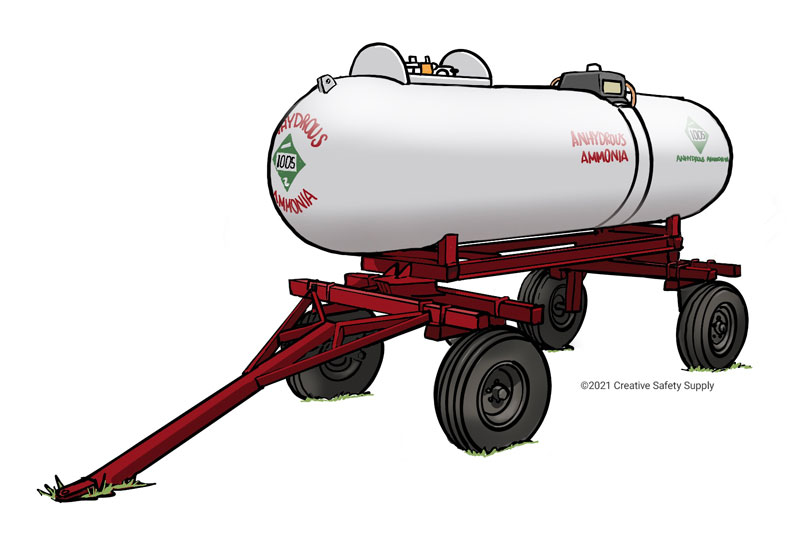 When utilized, the chemical is injected straight into the ground every other row before the planting season creating a pocket of fertilizer. The reason this is done before planting is because the chemical, if placed directly on the plants, will burn and kill seedlings/full-grown plants. It must be allowed to disperse into the soil for about 3-5 days if the soil temperature and moisture are at ideal levels.

It’s good to note that this fertilizer is used mostly for monoculture farming since nitrogen in the soil may be hard to come by with heavy feeders like corn. This is because plants like corn don’t have a good symbiotic relationship with specific bacterial colonies that help create nitrogen for the plants in their root systems. You can actually see the difference between plants like corn compared to legumes (green peas or clover), legume roots become “infected” so to speak by bacteria like rhizobia that are essential in the natural nitrogen fixation process. The plant roots then become covered with root nodules that are responsible for nitrogen fixation. When this natural nitrogen source isn’t present, farmers must supplement the soil with ammonia to promote productivity in their crops.