FOD: How to Control and Prevent Foreign Object Debris

FOD is an important quality control and safety concept that refers to loose objects and small debris that have the potential to cause damage and injury in work environments. The term “FOD” is mainly used in the aviation and aerospace industries, but is important in any industry where quality and safety are a concern. For example, FOD is a serious matter in manufacturing environments, where quality assurance mandates that everything is in its proper place and workers are kept safe.

Depending on the context, the acronym FOD has two different meanings; it either indicates Foreign Object Debris, or, as a result of the presence of this debris, Foreign Object Damage. Consequences of an FOD incident can include: 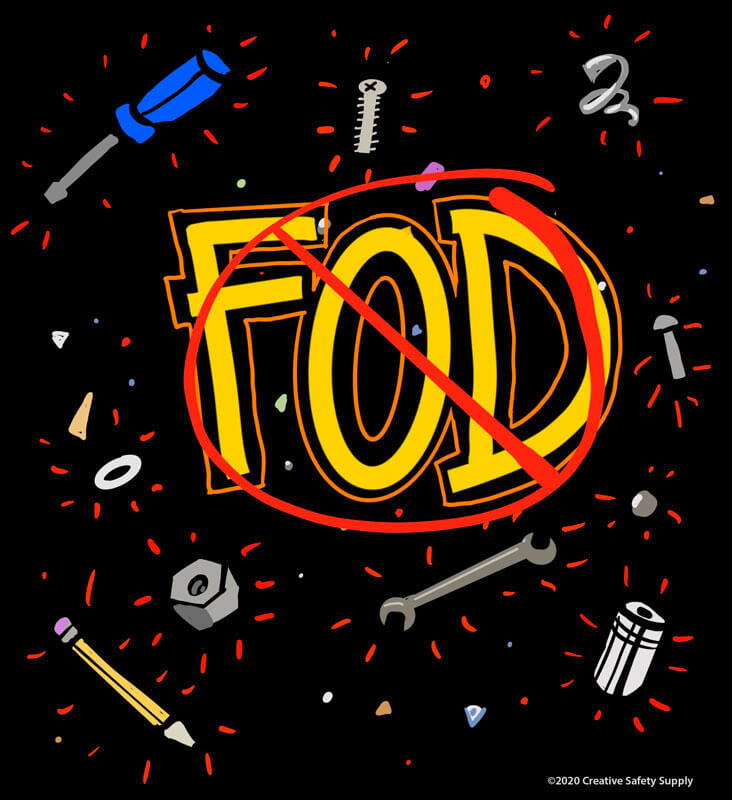 Foreign Object Debris is any item in an occupational environment that is not in the location where it should be, or is not supposed to be there in the first place. This includes loose hardware, tools, small metal items such as nails and screws, baggage items, loose parts, rocks, weather conditions such as ash, hail, or snow, and even small animals like birds. In aviation, this debris presents a hazard to cargo, equipment, and aircraft and has a potential for injury to personnel. In manufacturing, this debris contaminates products or otherwise compromises standards of quality control, on top of threatening the safety of workers.

Foreign Object Damage occurs when debris compromises safety, quality, or functionality. This may be to an aircraft carrier, or a manufactured product. In the best case scenario, this type of damage only impacts overall quality; in the worst case, it leads to serious or deadly accidents, such as a plane crashing on the runway due to Foreign Object Damage to an engine. 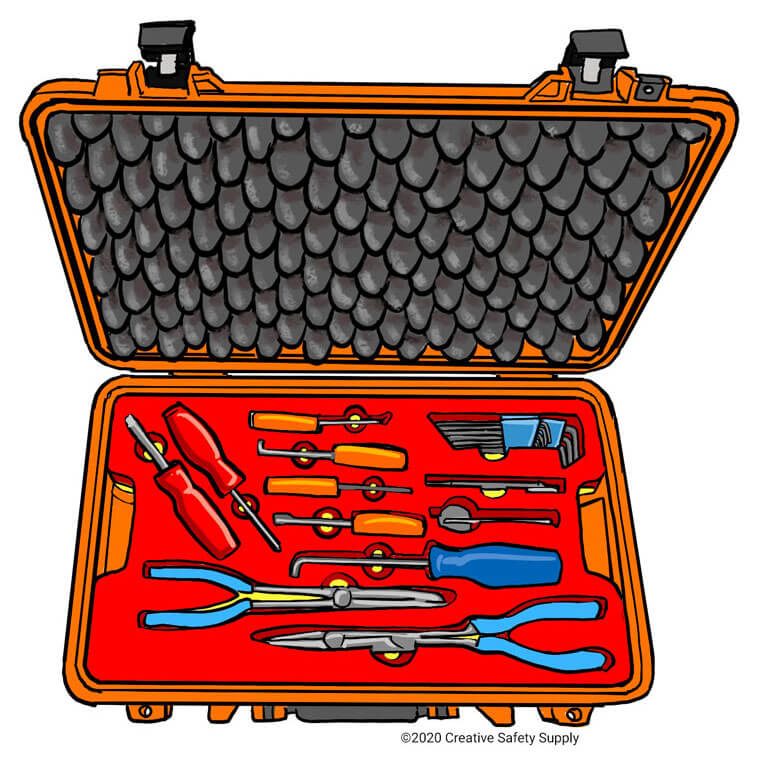 FOD is particularly prominent within the aviation industry due to the amount of risk it poses; even a small scrap of metal left on the runway can become lodged in engines or slash aircraft tires, and if the damage occurs while planes are attempting to take off or land, the results can be catastrophic. Jet engines also create a blast that throws debris everywhere and creates a dangerous situation for airline personnel on the ground, who might be hit by stones, broken pavement, broken luggage parts, mechanic’s tools, or tire fragments. FOD events typically peak during the early spring, as airports conduct construction, and during the winter due to snow and ice.

FOD is also highly concerning to the military; not only are their planes subject to the same type of damage and consequences, but the military must also deal with FOD caused by missile strikes and strive to ensure mission capability and national security. A study by the US Air Force shows that the service paid $240 million from 1995-2004 for incidents involving Foreign Object Debris. During this period of time, the Air Force was involved in almost 800 FOD events, the average cost of which was about $300,000.

What is FOD in Manufacturing? 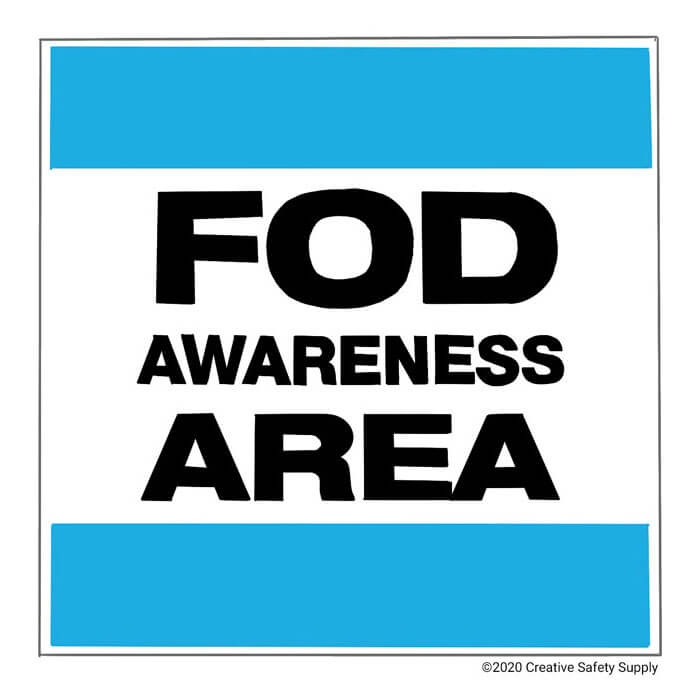 Non-aviation workplaces should also be concerned about FOD, as debris can present a safety and quality risk. Production processes and assembly lines involve a variety of tools and materials that must move quickly through the facility. Any area where products are received, shipped, stored, repaired, inspected, or manufactured can be designated as an area that may contain Foreign Object Debris. Many facilities utilize a standard three-layered system of signage for designating these storage or work areas and asking employees to be mindful of identifying and eliminating debris:

If you see this sign, you’re in an area where debris has a very low potential for impact, but is still a responsibility and employees must adhere to basic procedures; all items should be accounted for and general housekeeping should be practiced. Examples of these areas include shipping docks and receiving docks. 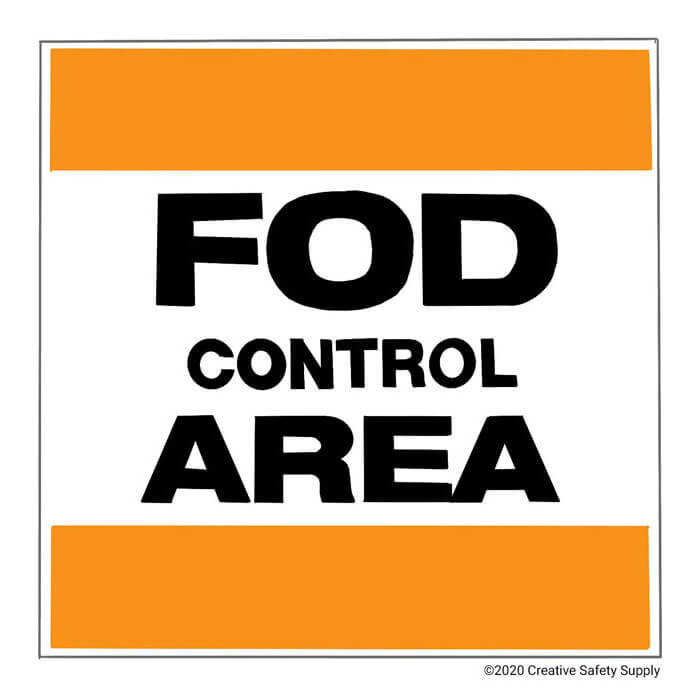 If you see a sign for this, you are in an area where debris has a higher, yet not severe, potential for impact. On top of basic procedures there will be additional Foreign Object Debris tasks and employees should have a higher sense of item awareness. Examples of these areas include modification processes, a packing area, and a parts warehouse. 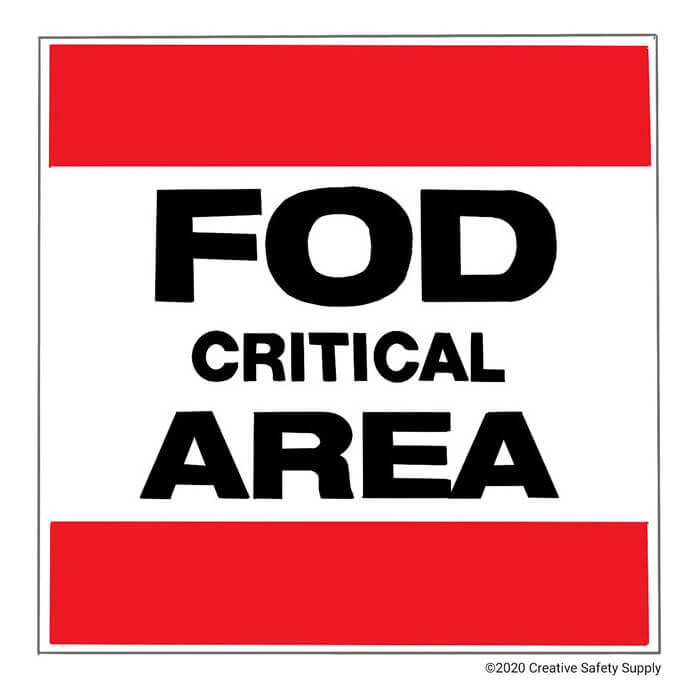 Signs for this indicate that you are in an area where debris has a very high impact potential and operations should be conducted with caution. Here, employees should adhere to strict procedures and maintain the highest sense of awareness possible. These areas include assembly operations and open product housing.

Many facilities practice a “Clean As You Go” mindset, an ongoing method of removing debris during operations to ensure that the area and any products are free of FOD. This awareness should be enforced in all environments.

In order to address and maintain awareness of the dangers of Foreign Object Debris, facilities should establish a comprehensive program that incorporates training, inspection, maintenance, and communication. Awareness and communication are at the forefront of FOD programs; controlling this dangerous debris begins with implementing wall signs and floor tape that make clear what type of FOD area workers are currently in and remind them to clean as they go. Whether employees should proceed with caution or simply maintain basic housekeeping practices, labels, floor tape, wall signs, and barricades are essential tools to make people aware that FOD has the potential to cause issues.

Another component to controlling foreign object debris is to keep your facility clean and organized by decluttering with 5S. This methodology enhances organization and efficiency through five phases: Sort, Set in Order, Shine, Standardize, and Sustain, which help eliminate unnecessary items and importantly, remove any debris. Implementing 5S can help workers incorporate a constant mindset of housekeeping, making “clean as you go” second nature during daily operations. 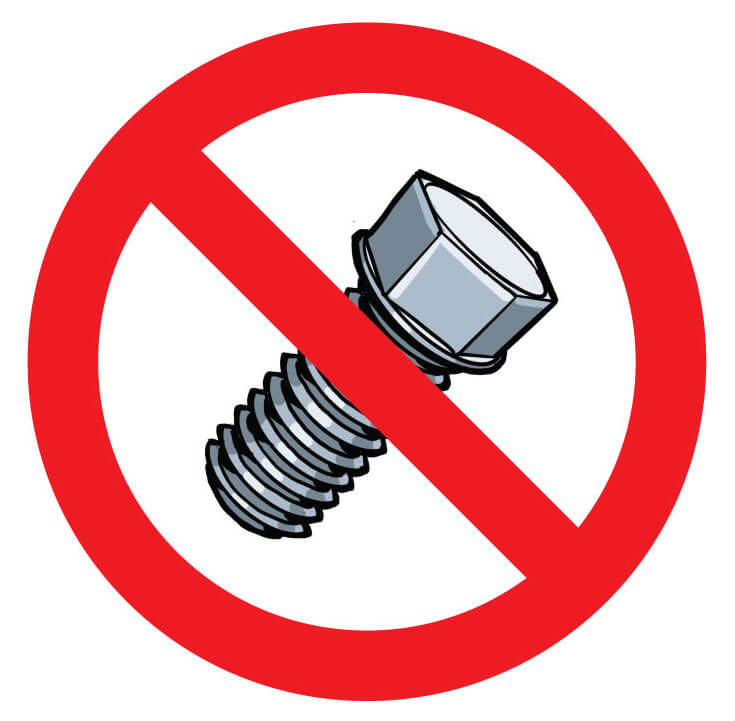 An organization can develop an FOD Prevention Program to eliminate debris as much as possible, reduce its consequences, and prevent debris from contaminating work areas in the first place. Typically, a program is based on guidelines and standards that are issued by authorities such as the FAA. Major considerations of a prevention program are using area designations (awareness, control, or critical area) to achieve risk mitigation through different levels of control, and helping employees understand which preventative actions to take depending on the area.

Programs heavily focus on training and the following elements should be included:

The Importance of FOD Awareness

No matter the environment, FOD will concern either safety, or quality. Foreign Object Debris isn’t just about equipment getting dented by a rock; damage from foreign objects can happen in a variety of ways and often is a constant threat. Many facilities can benefit from implementing an FOD Prevention Program, and the most effective way to eliminate debris is to ensure awareness among workers. With conscientious housekeeping, adequate signage, and cleaning as you go, it is possible to control and prevent Foreign Object Debris.