Henry Ford was the creator of the first affordable automobile for middle class citizens. He was the founder of the Ford Motor Company, an industrialist, a successful businessman, and most pertinent to the topic of discussion, the man who sped up mass production through meticulous development of the assembly line technique.

By the time the last shiny new Model T rolled off the assembly line in 1927, Ford’s business managed to sell millions of them, 15 million to be exact. In fact, this one-of-a-kind automobile maintained its first-place status on the list of most sold cars in history right up until 1972 when the VW Beetle surpassed it. Not only that, but the Model T is still on that list in 9th place out of 10. So how did Ford do it? Stick around to find out! 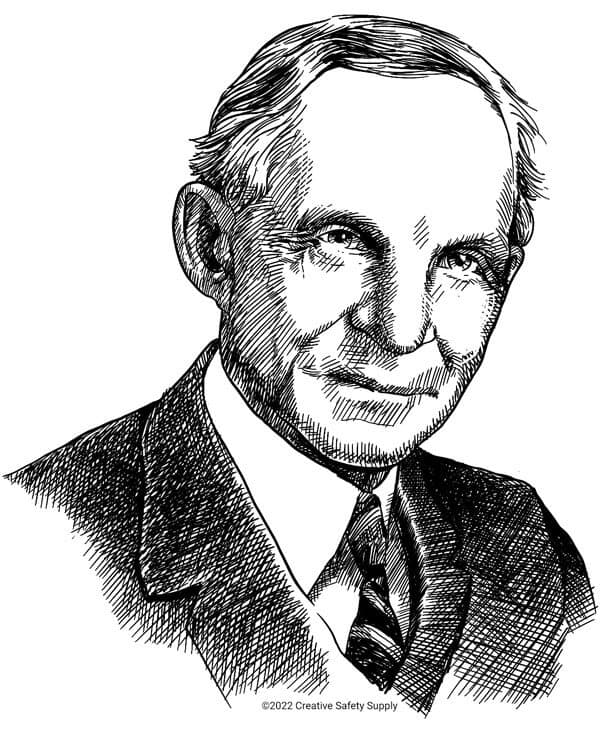 Who Was Henry Ford?

Born on July 30th in 1863, Henry Ford grew up on his parent’s farm in Springwells Township, Michigan along with his four siblings Margaret, Jane, William, and Robert. Rather than staying to take over the farm one day as his father wanted, Ford left home to become an apprentice machinist in Detroit shortly after his mother passed away. Before returning home, he worked with two companies from 1879 to 1882. The first being at James F. Flower and Bros., and then the Detroit Dry Dock Co.

Once that period in his life was over, he returned to the family farm to operate the Westinghouse portable steam engine being used. This clunky machine was part of the transitional period when people had begun using machinery instead of horses. Although, the steam engine still relied on horses to pull it from place to place where power was required to complete tasks.

With Ford’s experience on the Westinghouse portable steam engine, he went to work at Westinghouse’s Facility. He had the job of servicing their steam engines. During all this, Ford was also studying at the Goldsmith, Bryant & Stratton Business College in Detroit for bookkeeping.

The skills he gained in his early years are what set him up for success when it came to engineering his own automobile. In fact, he was inspired at a very young age when he first witnessed a Nichols and Shepard Road Engine in action. This machine was the first motorized vehicle and was absolutely awe inspiring to Ford.

In 1992, 17 years after his first exposure to this new type of vehicle, Ford finished building his very own gas-powered motor car. The Quadricycle as he called it was one of the more earlier versions of his later invention, the Model T, He drove this vehicle 1,000 miles from 1995-1996. A staggering number to think about since it was one of the first of its kind and only able to go 10-20 miles an hour.

Did you know at the height of production, Henry Ford’s factories saw a Model T roll off the moving-chassis assembly line every 24 seconds? Not only that, but these seemingly expensive commodities were available to the middle-class household! Up until Ford made his gas-powered family automobile, steam powered vehicles were only available, and only attainable by the wealthy. Now that’s an incredible feat for the time.

What became known as Fordism, Henry was able to merge both high wages for workers as well as the production of inexpensive goods for consumers. The chief example of this being the price difference from the first year of production in 1909 at $825 per vehicle to its last year in 1927 at $360 per vehicle. Add the fact that worker’s wages at the motor company more than doubled to $5 a day, giving his own employees the power to also purchase the cars that they created every day.

The cost of a Model T in today’s dollars went from as high as $23,763 all the way down to $5,363 almost 20 years later. Ford’s goal was to create a car that American families could afford and enjoy. How did he do it you ask? Let’s dive into the basis of what we recognize today as the beginnings of Lean manufacturing.

Ford was able to achieve record timing with the power of three concepts put into action:

With such a high rate of success, no wonder the Ford Motor company is still around 100 years later. Henry changed the way the automobile industry worked and did so in a way that allowed for more improvements to be made down the line as well. 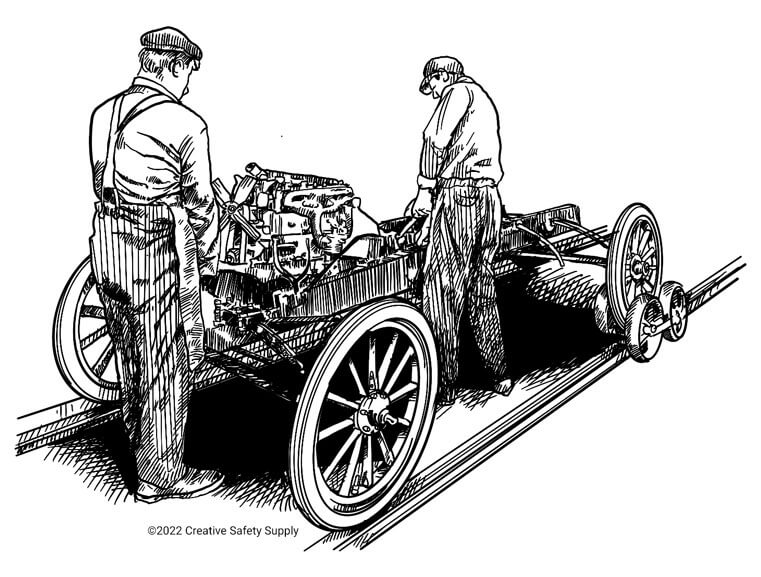 Let’s run through the process of making a Model T automobile. The beauty of Ford’s process was that every part was the exact same. Interchangeable parts were becoming more and more popular with manufacturers at the time because of the ability to mass produce finished product and have the quality be the same across the board. This was not like the days when gunsmiths handcrafted every firearm they made. Instead, production was streamlined and involved a whole team of people. Creating automobiles was fast and most importantly, required exactly 84 employees.

Inspired by local meat-packing plants in Chicago as well as a mill that he had witnessed using a conveyor system, Ford began to experiment with his current production line. It started off as laying all the parts on either side of the vehicle and moving the unfinished Model T with skids.

Eventually Ford perfected his system, involving exactly 84 steps and 84 employees who were trained to do the same task perfectly every time. The simplicity of each task meant that there’s wasn’t a particular need for skilled labor since it just required a short training period.

Henry Ford is probably one of the most recognizable figures in American history. Known for creating the Model-T, Ford was the owner of the Ford Motor Company and primary developer of the assembly line technique and refiner of mass production.

Ford was obsessed with eliminating waste, thereby creating a product more efficiently and quickly. Some of the things he implemented within his own factories include:

Conclusion
This is what consisted of Lean before Lean was Lean manufacturing! To make it even better, there was still room for improvement of course. Ford was lacking in variability of product. He once said that a customer could have any color they wanted as long as it was the color black.

While the manufacturing line could make a car in a little less than 2 hours, as opposed to the once 14 hours it took to complete, he wasn’t able to keep up with the changing demands of the customer. The Toyota Motor Company would later come along and improve Ford’s manufacturing model even more into what we know as TPS, the Toyota Production System.