Shigeo Shingo and the Importance of Operational Excellence

Shigeo Shingo once said, “Lean is a way of thinking, not a list of things to do.” In his most recognized work with operational excellence, he makes it clear that leaders have the ability, and responsibility, to lead the company culture in a direction that thrives alongside continuous improvement. The key point being connected to forging a relationship between principles, systems, and tools such as Six Sigma, Lean, etc. In short, those tools won’t stick if employees and management don’t understand the purpose of their actions or why something must be done.

That being said, many workplaces focus on how they must complete tasks, but they often leave out the question of why something must be done. Shigeo Shingo was a big proponent of challenging workplaces to overcome the instant gratification of completing a process and instead making sure they follow proven principles that promote the discovery of an easier process that explores better and faster ways for completion. Not to mention a less expensive way to achieve company goals. These naturally create more value for the customer, a high priority for continuous improvement.

This article will explore the meaning of operational excellence as well as introduce the man who popularized the idea, Shigeo Shingo.

Who was Shigeo Shingo?

Shigeo Shingo was born on January 8th, 1909. In Saga, Japan where Shingo grew up, he attended the Higher Technical School of Engineers and continued his education by graduating with an Industrial Engineering degree at Yamanashi Technical College in 1930. From there he went on to work in several different industries such as a technician that specialized in railways at the Taipei Railway Factory, and even eventually becoming a management consultant focused on improving factory management.

Overall, Shingo was an extraordinary influential Japanese industrial engineer who ended up working closely with Taiichi Ohno and the Toyoda family to further develop TPS and introduce the concept to the rest of the world’s manufacturing industries.

Some of the Lean manufacturing tools that Shingo was well known for spreading across the globe include Zero Quality Control, Poke-Yoke, and SMED.

What is the Shingo Model? 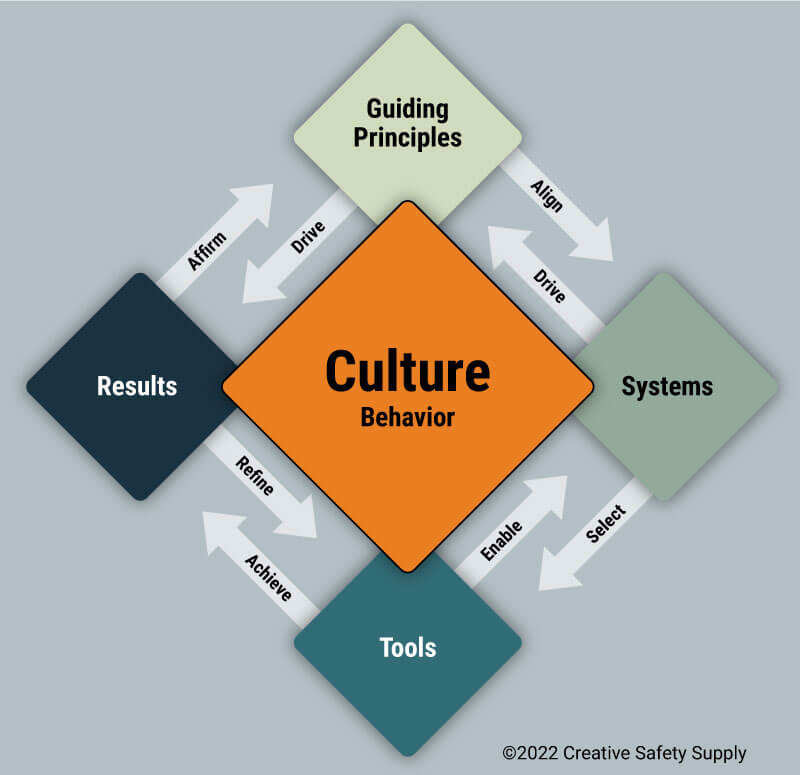 The Shingo Model is often represented in the form of a diamond. Also known as the transformation process, The Shingo Model represents the relationships between four components: systems, principles, results, and tools.

Culture is located at the center of the diamond. Culture touches the four points we mentioned a few moments ago. As the foundation of any workplace, culture is also considered the central point at which the Shingo Model operates on. All the guiding principles, of which will be explained in the next section, also rely on culture at the center of it’s focus. Culture is leaned on so much in this method because it acts as the driving force of change within the workplace. For example, a workplace culture that is intent on fixing mistakes is going to be better off in terms of continuous improvement than another workplace culture that only focuses on output.

Going from the center of the diamond to the very top is where the guiding principles reside. Shingo’s ten guiding principles are the building blocks of excellence and the creation of a sustainable working culture. Divided into four categories, the principles focus on culture development, improvement, an emphasis on understanding the company’s purpose, and the results of all their hard work.

Moving on to the right corner of the diamond are the systems used within the company to achieve the company’s purpose. The outcomes here are entirely determined by behavioral excellence as well as performance.

Moving on to the bottom corner resides the tools within those systems that are used to achieve the results the company wants. Many companies become fixated on solving their problems solely with tools. However, Shingo was adamant that the tools were to be used in conjunction with all other parts of the Shingo Model. Furthermore, only focusing on tools such as 5S and Six Sigma would answer the question of “how” to complete a task but would leave the workers wondering “why” it was necessary.

Lastly, we have the left-hand corner where results are located. Many know them as Key Performance Indicators, or KPIs. Tools and workplace culture help to achieve the expected results while affirming and the guiding principles and refining the tools used.

All of this to say that leaders cannot expect to achieve results by just haphazardly setting a goal without the means to achieve that goal. Building a successful program means creating the right culture and gathering the appropriate tools, systems, and guiding principles to make a process more sustainable.

During the development of Shingo’s operational excellence theory, he discovered that it required three key concepts that worked together, those being Principles, Systems, and Tools. It has been noted by some that companies tend to gravitate towards the tools that are said to improve operations at the workplace, whether that be for safety, production, or morale. However, many often don’t understand that Shingo made clear that the tools implemented did nothing if the proper principles and systems were ignored.

Imagine these four categories stacked in a pyramid shape, with the tip of the pyramid being the end results of a company’s hard work. That means cultural enablers are the foundation of Shingo’s model.

Next, let’s go over what each individual principle means for both the workers and leadership. They are as follows:

It is speculated that Shigeo Shingo was more well known in the west than in Japan. Upon his introduction to Norman Bodek, an American entrepreneur, publisher, and the founder of Productivity Inc., Shigeo was on the pathway to notoriety. Bodek has translated both Shigeo’s Japanese publications into English as well as countless others in the 1980’s. In fact, he has published over 100 Japanese management books into English.

The English translation is really what brought Shigeo’s material, as well as the Toyota Production System basics, to America’s manufacturing plants.

Bodek also was the founder of what many are familiar today as the Shingo Prize for Occupational Excellence. This prize is known globally and is bestowed upon companies by the Shingo institute that meet workplace improvement and achievement goals as determined by the Shingo model as well as Shingo Institute examiners.

As mentioned earlier in this article, Shingo did contribute a great deal to that of Quality Control, and important part of following any Lean manufacturing strategy. The three tools that he focused on in his teachings to achieve operational excellence alongside the principles of the Shingo model include:

These of course are some of the tools that can be used in the Shingo Model. Remember! Tools must be paired with principles, systems, and results to actually achieve quality in the workplace.