Working as an engineer at Motorola, Bill Smith was the first to conceptualize Six Sigma back in 1986. The name “Six Sigma” originates from statistics, directly referring to the Greek letter “σ” that represents the standard deviation, which is the amount something deviates from what it should be ideally. With that being said, Six Sigma aims to have six standard deviations between the mean and the nearest specification limit. To be specific, this methodology aims to have fewer than 3.4 defects per million opportunities.

While Six Sigma began in manufacturing, today it can be used in virtually any industry across the world. Various techniques and tools that are used for process improvement and eliminating defects sit at the core of Six Sigma since the methodology puts its primary focus on measuring quality and aiming for absolute perfection. The methodology puts systems in place to primarily collect data and measure the business’ success so they can try to reduce defects and variations in processes through quality improvement projects. Doing so improves quality and customer experience, ultimately making a business more successful.

There are five laws that Six Sigma operates on. Those who understand the definition and principles of each and know follow them correctly have the opportunity to not only attain consistency, but also obtain an amount of quality that was not present before the implementation of Six Sigma. The main body of those five laws include the following:

Six Sigma is truly unique in this respect as the program can be tailored into something that has a purpose within different business models. The end goal of being as efficient and precise as possible is the same for all companies that use Six Sigma, but the pathway to those project goals are different for everyone and define the outcomes.

Six Sigma projects primarily follow two project methodologies inspired by Deming's renowned “Plan-Do-Check-Act” Cycle. Each methodology is made up of five phases and is represented by the acronyms DMAIC and DMADV. It may help to know that DMAIC is used mainly for projects aimed at improving existing manufacturing processes while the difference between DMADV, on the other hand, is used for projects aimed at creating new product or process designs. 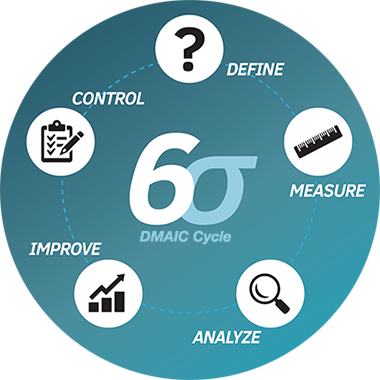 Both of these options do well in environments that place focus on Six Sigma. With that being said, it is important to have plans such as these that incrementally work on reaching the company’s goals for them to not only come to fruition, but also to be successful through the implementation of improved business processes. Quality management is everything, and reaching that status takes meticulous planning.

When corporations are plagued with defects, processes slow down. Six Sigma aims to decrease the chances of deviations to 3.4 defects per million production cycles. This Six Sigma Guide explains the steps of a Six Sigma, how to get Six-Sigma certified, and what tools you’ll need to make Six Sigma a success. 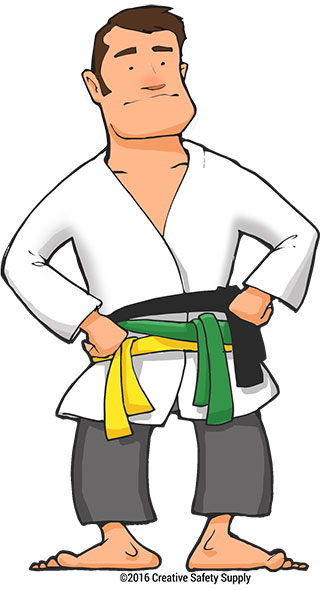 The Six Sigma program recognizes individuals based on their education and experience using the aforementioned methodologies. Similar to martial arts, there are formal levels within the program that are identified by different colored belts. Students must attain certain certifications in order to attain these belts which reflect on their development. The different colored belts include white, yellow, green, black, and master black belts.

The Six Sigma white belt is given to an entry level individual. This person needs to have a good understanding of the methodology and possibly have some experience acting as support in a Six Sigma environment as a team member. In a traditional Six Sigma organization, a white belt will have an understanding of all of the following aspects of Six Sigma:

This belt is most appropriate for individuals that are either interested in implementing Six Sigma into their facility program and also want to learn more about each productivity tool and performance improvement.

To achieve a green belt status, the individual must hold excellent leadership skills, have a knack for being logical and analytical, be constantly working on improvement, and show perseverance when faced with difficult problems; often having earnt a higher salary for their responsibilities.

Black belts spend 100% of their day working on improvements and project implentation for their companies and are an expert in their field. Only a select number of green belts will ever make it to the black belt level due to the high standards and level of commitment entailed, and those who do should meet the following criteria:

Each facility should evaluate its needs and determine whether someone can meet the requirements of a black belt. In some organizations there is just one black belt certified individual, and in these cases he or she must be an expert in all areas in order to make a return. In other companies, there may be multiple black belts, so the excellence can be spread around.

Organizations that have Six Sigma master black belts usually have them manage all the Six Sigma processes within the company. These individuals work closely with the CEO, executive management and area leadership to develop and implement projects, which are typically led by a black belt.

Everyone in a Six Sigma facility should have at least a basic understanding of common words and terms used in this system. While it is ideal to have everyone at least yellow belt certified, it could suffice to provide very simple training to get things started. The following are some key Six Sigma process improvement terms that everyone across the teams should put emphasis on:

The choice to make the shift over to Lean Six Sigma is an easy one, but implementation and overall success depends on factors such as if the company has done their due diligence regarding designing, planning, and organization approach to get the program up and running and sustaining the new program into the future. To get that done, they need to have a plethora of tools at their feet to get things done.

The Six Sigma method is well established across the globe and has proven to be effective in many industries, offering competitve advantage. Learning a key fact or two about the system and its history can help people see just how powerful this methodology can be for a company and how helpful certification can be for an individual if they are looking to get higher up the hierarchy.

Whether a company already uses Six Sigma or is hoping to implement its features for the first time, one of the best things any individual can do is get a Six Sigma certification. These certifications not only benefit the company that employs these individuals, but also provide major career benefits to the individuals themselves on a long term basis.

When a facility begins using the application of Six Sigma seriously, it is a good idea to bring in a master black belt, or at least a black belt, to ensure the system is managed properly. As with any type of process improvement program, if it is not run properly from the top down, it could cause more harm than good. While it will take some effort, proper implementation can revolutionize a company.