The Fishbone Diagram, formally named the Ishikawa diagram, is a tool for managers to get to the root cause of an issue in production. This diagram is used in Root Cause Analysis and is a visual representation of the 5 Why’s strategy. Starting at the top of the diagram pictured on the left, the tail of the fish represents the main problem or issue that is trying to be solved. Each bone of the fish going down represents a “Why” in the analysis method, ending up at the head of the fish, symbolizing the true root of the problem.

How does a fishbone diagram work? 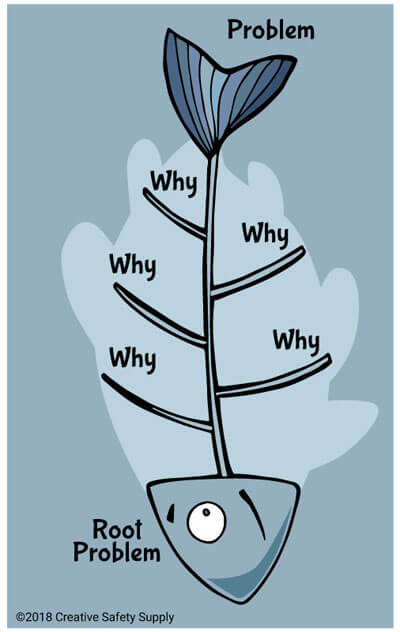 2. Why is the battery dead?

3. Why isn’t the alternator working?

4. Why is the serpentine belt broken?

As shown from the example, the true root of the problem is identified after the question why is asked five times. The car didn’t start just because the battery is dead, but the car wouldn’t start because maintenance was not kept up by the owner. By fixing that problem and not just charging the battery, the owner of the car can avoid this problem, and many others, in the future.

When these reasons are listed on a fishbone diagram, it's easier to understand the root cause -- even if someone has just learned of the problem.

Important note: Ask “Why” until the root cause is discovered, even if it is more than five times!