An Introduction to Gantt Charts

The Gantt chart was first introduced by Henry Gantt. It is a type of bar chart used by business and manufacturing organizations to indicate schedules for a particular project. In other words, a Gantt chart is a graphical representation of the time it takes to start a task and follow it through to completion. With a Gantt chart, an organization is able to indicate both start and finish dates of a project alongside summaries of each element of the project. If done correctly, it can also show how much an element of a project depends on, or is related to, the other elements. In addition, Gantt charts may also be used to indicate the current status of a schedule using "percent-complete" shadings and other features. 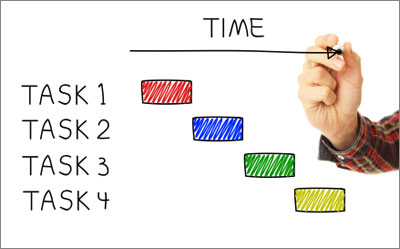 How to Create a Gantt Chart

There are several ways to create a Gantt Chart. First, you may choose to use dedicated project management software to do it or simply use Excel. Some examples of project management software are: Project KickStart Pro 5, SmartDraw, "Gantt Chart Software", etc. A few of these are free, and choosing which software to use is personal preference. However, if you already have Excel installed on your computer, it will work just fine.

More often than not, a Gantt chart is most effective when used to illustrate steps involved in completing small projects or events. As the task or project becomes larger, using the chart becomes difficult, which makes it unrealistic for use, especially on most computers displays because larger tasks may not fit well on a screen. Another issue with using Gantt charts for project management is that they communicate very little information per unit area of display and as a result are often considered too complex to effectively illustrate larger projects.

Other advantages and disadvantages of using Gantt charts are as follows: